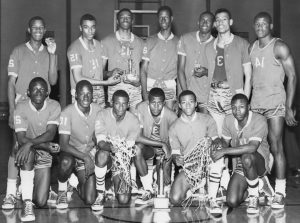 America was having serious challenges in 1967. Unrest was running rampant from sea to shining sea, whether it was the thousands of protests over the Vietnam War, the outcry over equal rights for women, mistreatment of underserved citizens which led to violence in nearly 200 cities, or the turmoil of a racially-tinged confirmation process that followed Thurgood Marshall as he was appointed to the Supreme Court. In other news, more than twenty thousand soldiers died in the Six-Day War between Israel and the United Arab Republic, and China tested its first hydrogen bomb. There were silver linings, however, with the first heart transplant operation, the movie “Guess Who’s Coming to Dinner” released and the first Super Bowl being played.

What the greater population missed that year was a state championship in basketball by Beach High School of Savannah, Georgia. It was the first time an all-Black squad played in the once segregated Georgia tournament. As a result of its history-making season, Beach was selected the number one team in America by Sports Illustrated Magazine.

The takeaway from this brief story was that in spite of a segregated America, a school in the South for Black children could not only graduate superb athletes, but also become a launching pad for future leaders of which all Americans could be proud.